It’s true that today’s students just aren’t what they used to be. Increasingly, the student body in higher education is being comprised of anything but our idea of the traditional young learner, bridging an academic journey with the first steps to their eventual careers. It’s a trend that’s forcing colleges and universities to evolve their social and academic experience to cater to the different needs and expectations of non-traditional students, and with this segment projected to grow more than twice as fast as traditional-aged students in the next six years, it’s one that’s taking on an even greater urgency.

“The makeup of these students is radically different,” explained Lisa Malat, Vice President and Chief Marketing Officer for Barnes & Noble College, during a recent National Association of College Auxiliary Services (NACAS) webinar. “Today, a quarter of all students are over the age of 25, with 40 percent working part-time and a quarter having dependents of their own,” she remarked. The webinar, titled Achieving Success for Non-traditional Students, explored how these students, often presenting a unique set of challenges, have very different and specific needs compared to their more conventional classmates when it comes to feeling supported and successful throughout their academic journey.

This summer, Barnes & Noble College surveyed 1,000 traditional and nearly 800 non-traditional students, comparing their experiences in order to answer three fundamental questions. “The first was to understand the unique needs and social expectations of non-traditional students,” explained Barnes & Noble College’s Market Research Specialist, Steve McSpiritt. “We also wanted to identify the barriers to their success—and discover ways to help them to achieve greater levels of that success,” he added. 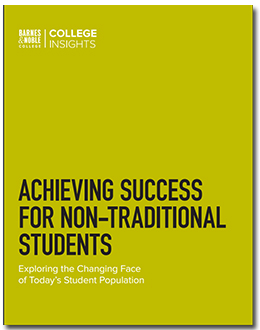 To be eligible for the survey, non-traditional participants had to meet a certain range of criteria, which included: being 25 years of age or older, an online student or enrolled in a distance-learning program, a first-generation college student, employed full-time during school, having dependents, of veteran status, or a re-entry student. Unsurprisingly, the survey concluded that the non-traditional group greatly valued their education, with 90 percent considering college ‘moderately’ to ‘very’ valuable. They also saw higher education as an opportunity to improve careers, incomes or set a good example for their families, while traditional students were more likely to attend for social reasons or to meet family expectations. “I was at the ceiling of a dead-end job with no future,” commented one participant, “After I’ve graduated, I’ll be prepared for a career instead of just another job.”

Here, Malat drew a corollary with the company’s earlier research into Generation Z (Gen Z). “Both groups showed they were more likely to attend college for career improvement or financial reasons, with Gen Z rating career preparation as their top reason in choosing a college. This is in contrast to Millennials who are more likely to base their college ambitions on seeking personal fulfillment,” she adds.

When it comes to barriers to their success, financial concerns loomed large, with 43 percent of non-traditional students citing ways to finance their education as a ‘moderate to big challenge.’ “Money is a struggle,” expressed one survey taker. “It all causes a lot of stress and makes me incapable of performing at the level I know I should be.”

While traditional students tend to rely on scholarships and family members to finance their education, non-traditional students were more often found to be juggling family needs with student loans. For this reason, they were more likely to request additional financial support or even quit their programs altogether. Pressures of life outside of their academic ambitions also seemed a driver for non-traditional students to highly favor online courses—and to welcome new technology with a preference for adaptive learning materials. In fact, 69 percent said the ability for them to take courses online was important, while 66 percent registered a preference for digital textbooks, and a third of respondents favored adaptive and collaborative learning. “These numbers provide a really good indicator to colleges looking to better deliver OER and adaptive learning materials, such as competency learning programs, that will support and enhance their success,” Malat said, pointing to the use of platforms, such as LoudCloud, to increase access to more affordable course solutions and provide students with the right academic support as they needed it.

69% of non-traditional students said the ability to take courses online was important.

Another significant threat to retention is the disconnect that non-traditional students feel with their campus and their fellow classmates. “I have little in common with other students, and I am very busy outside of school, so I have never connected,” one said. “These students feel less socially connected as many spend less extra-curricular time on campus,” noted Tamara Vostok, Director of Consumer Marketing for Barnes & Noble College, underlining the importance of social support events, such as VIP Nights and De-Stress events, held at the campus bookstore.

Despite setbacks, today’s non-traditional students are a motivated and determined group, highly focused on the outcome of their college experience and describing themselves as “academically successful, motivated and optimistic.” Malat suggested that here was an opportunity for colleges to provide more counseling advice from non-academic staff, together with the opportunity to participate in the bookstore’s highly successful Career Now program to help support their post-college success. She also noted the opportunity colleges and universities now have, armed with a deeper understanding of this growing student population, to meet the expectations, and ultimately ensure their success. “Research powers everything we do,” she says. “It helps us and our campus partners better understand the thinking and business environment we operate in—and we believe research like this helps fulfill our mission to support student success both in and outside of the classroom.”

To download a copy of the Achieving Success for Non-traditional Students: Exploring the Changing Face of Today’s Student Population report, click here.